Shoot your way to the top with Galaxy Warriors!  Save the Galaxy  Galaxy Warriors is an exhilarating space-themed vertical flight game. Join the fight against invaders as you fly across the starry sky. Shoot at other spaceships, aliens, and asteroids that are trying to stop you from getting to your destination. With everything you destroy, you’ll free coins that you must collect. With these coins, you can purchase upgrades. Upgrades include a defensive shield, stronger attacks for both front and side shooters, longer-lasting shooters and coin magnets. As you’re fighting against your enemy, avoid any debris and shots but fly towards boosts and coins. As you gain more coins and upgrades, you’ll be able to pass more and more waves beating out your own score every time. What are you waiting for? Join the fight to protect the galaxy in this online game. 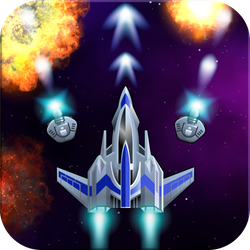